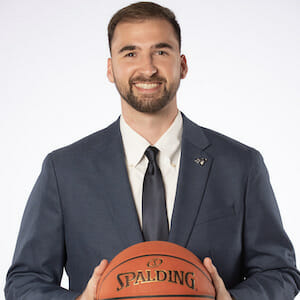 Davy, a former 1st team all state player who scored 1,773 points in high school, is a passionate teacher committed to helping players maximize each day.

From being the star of the team to battling significant injuries that kept him off the court, Davy experienced it all.

Few former players have the ability to speak the language of every person in the room. The star. The players struggling to get off the bench. The injured player. The coach who’s just starting out all the way to the head coach of a team.

But Davy does just that – with authority and empathy.

He cares about helping players realize each day is a gift and tomorrow is not promised. He believes that what happens to you is not as important as how you respond or who you are becoming.

Davy first attended PGC in 2012 as a high school player. In essence, he learned control. How to control his game, his body, and most importantly his thoughts. Davy became a more confident player and a more equipped leader. He developed life-long relationships and a new mindset that set him up for success. He was blown away with his experience.

Davy played 5 years of college basketball at Mississippi college, where he was later elected by his peers and professors into the school’s Hall of Fame.

After college, Davy played 2 years of semi-pro, coached 3 years at the college level, and now coaches at Unity Christian School, using basketball as a platform to teach life.

When your player attends a camp led by Davy Fisher, they’ll experience a teacher with a rare ability to get players better fast while providing them a roadmap to leave camp ready to take ownership of their basketball career.

What They’re Saying About Davy Fisher

"Davy Fisher was the director and he was a great educator of the game and the whole camp!"
- Diane Hargon

"My daughter was fortunate & talented enough to get to start on her high school varsity team as a freshman and she will tell you the vast majority of the things that coaches like about her she learned from PGC!!! Thank you so much!!!"
- Mark Edlefsen