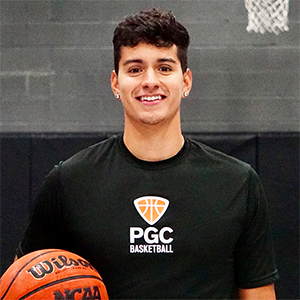 Diego Poore is currently a course director for PGC. He first became involved with PGC while he was in high school (Cumberland County) in 2015. He was a 4-time PGC grad athlete. He’s also served as a Basket Instructor.

Diego continued his basketball career at Tusculum University (Greeneville, TN). During his sophomore year, he was named a team captain. He was named to the Southern Atlantic Conference and Athletic Director’s honor roll each year.

In 2018, Diego spent time instructing camps for the Golden State Warriors. He is now finishing up his junior year of eligibility at Southern Wesleyan University (South Carolina), where he was named to the Dean’s List and team captain. He is pursuing a degree in Sports Management.