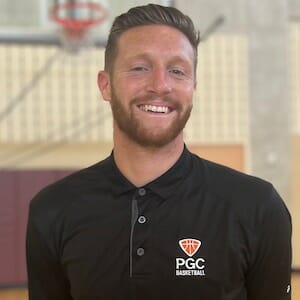 Working out with Coach Aubert has really helped me on and off the court. He pushes you to be better than you were the day before, and I can really see that I have become a better player since working with him. More than anything he really cares about you as a person, and will do anything in his power to help you succeed and get to where you want to be.

Dustin Aubert knows what it’s like to be a high school athlete who wants to make the most of himself and play at the next level. After finishing a successful college basketball career, Dustin has dedicated himself to paying it forward – helping thousands of athletes pursue and accomplish great things with their own careers.

Whether it’s been coaching at the NCAA Division I level, training NBA players, or leading PGC camps, Dustin has a proven himself as one of the most dynamic young teachers in the game today. Coaches respect him and players line up to work with him!

He’s currently the men’s basketball coach at Solano Community College. Since his time at Solano, Dustin has assisted in moving players onto the Division I, II, III and NAIA levels on scholarships.

Prior to coaching at Solano, Dustin was a Graduate assistant at Long Beach State for the Men’s Basketball program and assisted in player development, scout creation and analytical stat tracking. He earned his Masters from Long Beach State in Kinesiology with an emphasis in Coaching.

This past summer, Dustin was brought on by fellow PGC Director, Gilbert Abraham to assist with the NBA Predraft workouts held in Frisco, Texas and Chicago, Illinois. Dustin assisted in on court skill acquisition, as well as off court film breakdown for over 30 U.S. and European draft prospects.

Dustin is a multi time PGC grad who first attended in 2008. When you choose to send a player to one of Dustins session, they will come back, not just a better player, but person too!

Dustin is married to his wife Bailey and they live in Davis, California.

Each action you take is like a vote for the type of person you want to become. What They’re Saying About Dustin Aubert

"Dustin was excellent. His ability to relate to the athletes was elite. It really helps to have rapport- and he engaged with them well."
- Matt Sagaser

"Amazing camp. Great energy and great at getting me out of my comfort zone. A great camp if you want to take your game to the next level. Teaches the game inside the game."
- Daniel Cha

"I learned a lot at this camp and the coaches and people made it a very enjoyable experience."
- Madesen Lynch

"I loved, enjoyed, learned from, and appreciated every second. Thank you so much!"
- Echo Kelly

"Terrance was upbeat and positive about everything he learned, was able to give concrete examples of the mechanisms taught to help players keep their focus."
- Nicole Bayly

"It was one of the best weeks of her life, the informaton in skills are very useful for helping her on the court and in life. We appreciate the well-rounded teachings that apply to basketball and beyond."
- Allison Samson

"This is the sixth PGC event I have attended and I am fortunate enough to be a host. The curriculum directors and staff never disappoint. I am amazed how much I continue to learn at these sessions. Dustin was PHENOMENAL! His attention to detail and making every athlete feel valued is a special gift!"
- Shawn Montague

"Our son was totally pumped after camp, he said he learned a lot of great information. I was impressed with the notes he took and how positive he was about the entire experience."
- Dawn Leonhardt

"I loved it and learned a lot"
- Keelie Sunde

"I got exhausted. But I learned a lot and became a better player in a week!!"
- Katelyn Ankeny

"Our daughter has attended the Playmaker camp, online camp, and now the Scoring and Shooting camp…all have been a wonderful experience and has increased her knowledge of the game as well as improved her skills/game, and shown her how to be a leader on and off the court."
- Sara Terpstra

"My son immersed himself in the camp's approach and learnings. He valued all the coaches and their passion and drive. Any issues were remedied by the staff."
- Sig Shirodkar

"Looking at film and being in the classroom was a great way for my daughter to learn. Then Implementing it into the basketball sessions was good."
- Youjia Ma