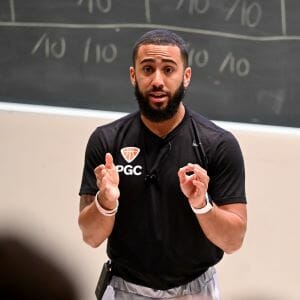 Rudy Bentley Jr. has been a mentor, trainer, and like another big brother to me for as long as I can remember. He’s assisted me the past few years in skills on and off the court that have helped me propel myself to a career playing basketball overseas. He’s such a selfless person and always makes time to work with me, even though sometimes I know I can be hard to work with. Any question I have regarding anything on and off the court I know he can provide some valuable insight or words that can positively contribute to my way of thinking or my basketball game.

Rudy Bentley, a 2x PGC grad, a four-year college starter and former collegiate coach, has transformed the journey of players and coaches all across the globe. Rudy knows what it’s like to be undervalued, feel overlooked, and face adversity. But unlike so many high school athletes, he didn’t let those circumstances get the best of him. He persevered and overcame.

Known as a great penetrator and creator for his teammates, Rudy was in the top four in assists per game every year in their conference.

During his undergraduate playing career, Rudy began player development and training for some local high school athletes, discovering personal satisfaction in the growth of other players. At the end of his playing career, Rudy became an assistant basketball coach at Lakeland University, then Wisconsin Lutheran College before joining forces with fellow PGC director Sam Allen at Blue Collar Basketball.

Rudy also works on PGC’s basketball development team, where he’s highly involved in the refinement and innovation of all PGC camp curriculums! "Caleb thoroughly enjoyed this camp and said he had learned so much. Cannot wait to see him use it on the court!"
- Yvette Newcomb

"In my opinion #1 camp in the country"
- Christian Palmer

"This is my 3-4 time as an observing coach. PGC is in my opinion as a former college Head Coach of 15 years, the best camps out there. Coach Rudy was amazing. His passion for teaching the game and “life” was excellent."
- John McGraw

"This is my 5th PGC camp and it was another great one. Met lots of new people and got a lot better this week, figuring out I can do stuff that I had never used before."
- Joel Ewald

"I loved these last 5 days. I have had so much fun and feel my game has grown tremendously."
- Andrew Knight

"My son JJ thought that all the PGC coaches were great and learned a lot from them all. He especially enjoyed Director Rudy, who made himself very accessible to the campers and kept everything positive, fun and inclusive."
- Jeffery Wilcox

"This was not like any basketball experience I’ve ever had. The level of play and the intensity really helped me improve as a player and as a leader."
- Jacob Asbill

"i loved the freedom and being able to stay on campus. at first the schedule looked overwhelming but once i got the hang of it, it wasn’t so bad. everyone is extremely nice and organized"
- kaleah wells

"The pages of notes tell the story. Between my daughter and her two friends, they combined for 86 pages of notes! I love the learning that takes place during a PGC session!"
- Shannon Harris

"I love how I learned so much in just one week. And it made me want to continue to study these things once I leave."
- Anaja Jackson

"My experience was great. I felt a lot of improvement and that is the reason I came here."
- Charlie Wohlers