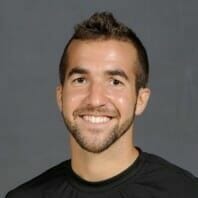 From being an instructor for over 22 years and being a Master Training Specialist, Chad is the best instructor I have seen. He uses all of the theories, laws, and styles of learning to engage students successfully.

Chad is an unbelievable person, teacher, and coach, and I am extremely grateful I had the opportunity to attend PGC. Chad inspired me to refocus my life, re-SCHAPE my habits, and live my life with passion and serve those around me. My week with Chad made me want to be a better man, better coach, better friend, and better son.

I learned how to improve my game at PGC, and I also learned how to make my team better. Without this knowledge, I would not have been close to the level of a university basketball player. However, what is really special is how you made me a better person. Chad, you took a ball and a net and somehow changed the way I live and think. You changed the way I interact with others, myself and my environment. Through basketball you taught me life lessons. I will always cherish the time I spent on the court with you and I appreciate you giving me everything you had to offer.

Chad Songy first attended PGC as a high school player in 2002 and has been applying PGC’s principles to his life and career for two decades.

Chad was truly an efficient and versatile point guard at Millsaps College, where he was an SCAC All-Conference player and a 2009 Nominee for the Bob Cousy Point Guard of the Year Award, given to the best male point guard throughout all NCAA Divisions. However, after his junior year of high school, Chad didn’t have any college scholarships or interest.

As a 5’8″ point guard, Chad was often physically outmatched, but rarely outsmarted. The exceptional leadership skills Chad developed at PGC helped him to succeed as the starting point guard on Millsaps College’s most successful team in both school and conference history. The 2007-2008 Majors finished the season 28-4, losing to the eventual Division III national champions in the Elite Eight after Chad kept their magical season alive by hitting a buzzer-beating three-pointer to help his school reach the NCAA’s Sweet Sixteen.

Chad is the founder of Sustainable Giving Homes which uses real estate profits from homes in Austin, TX, and Cape Town, South Africa, to fund educational opportunities for students throughout Africa, including PGC’s sponsorship of the MCF Sports Center in Kenya. He also teaches throughout the year through a variety of projects he founded that include stand up comedy, cultural growth experiences to Africa, and mentoring young leaders and entrepreneurs.

Chad is head of curriculum at PGC, a course director on the PGC tour and assists in PGC’s training of both Directors and Staff.

What They’re Saying About Chad Songy

"The Grad School is an amazing experience and is overall life changing. It was extremely impactful to learn not only the valuable PGC concepts taught in the previous course but add to if by instilling life long skills on and off the court from health and wealth to what in your mind and how to properly drive your mind."
- Jayde Tschritter

"Best camp I go to and I’d come back a million times. Also one of the best way to improve your game on/off the court, you come out more confident, better as a player of the game and leader. This camp just makes you better as a player physically and mentally."
- Peyton Gonzales

"I learned so much this week, not only about the game of basketball but about myself. The confidence I gained and leadership skills were so valuable and I will take it with me the rest of my life."
- Lauren Tarpey

"The way Chad taught and explained himself fully and just poured everything he could into the athletes just inspires me. The way he broke down film so easily with no hesitation was definitely something I would love to be able to do in the future! I cannot wait to come back - as an athlete a bi or a OC again!"
- Ireland-Sky O'Leary

"I loved the experience, learning new basketball knowledge and meeting new amazing people. I was injured most of the camp but I feel was able to feel involved."
- Christian Marshall

"Bar none the best experience for young student athletes looking to get better as basketball players and people."
- Kip Butler

"This camp was my favorite camp yet, with all the connections i’ve made and all of the real life advice and experience i’ve learned from this week, i feel like this camp with impact my life more than any other camp i’ve been to."
- Jack Ferrence

"The best PGC course i’ve been to, I learned so much about mental aspect of basketball. This just made me realize that you have to practice the mental part of the game just like you do the shooting and ball handing."
- Jake D’Auria

"PGC taught me many valuable things throughout the week and pushed me to be my best. I did not expect my experience to be anywhere near like what I experienced, it was amazing."
- Chelsey Herget

"I feel like I can go on to the next level of basketball because of PGC. It helped me grow confident in myself and become a better leader."
- Kimberlyn Black

"I had been to a PGC course before, and I knew what to expect. I was still amazed by the experience, and found that it was even more fun the second time."
- Casey Hodgman

"PGC made me believe in myself and taught me so many ways to make my game better. Best camp I've ever been to. I've learned so much."
- Corrine Hamill

"This course has improved my basketball IQ. Being able to read defenses and knowing what strategies to use to score has been the most helpful. Also knowing what to do when you get the ball. Some grab and immediately look to pass, whereas here you must peek. Attacking the paint is also so important and I personally have students of the game that assume, “shooting from the logo” is the coolest move ever and that’s how they will get to the next level to play. Whereas here making the easier bucket is more impressive & having control."
- Ashlyn Reyna

"I am defiently going to come back next year to PGC whether it’s a different session or this one because the impact it had on my basketball and personal life was amazing and only in a good way."
- Reesa Looney

"My daughter is entering her Freshman year and wanted to hone in our her skills. She only started playing basketball in 6th grade and loves the game. She learned a lot about her position as well as being a better leader than she already was. PGC has given her new confidence and drive to get out and play even more and harder. She made amazing friendships and is excited to come back for more next year!"
- Sarah Fisher