When your harmless superstitions and rituals get you to the point that you are trying to have a bad day in practice (so you will play well in the game the next day) or trying to miss in warm-ups (so your game shooting will be on), you must realize that you have gotten carried away in your thinking. You have become not merely a bit superstitious, but allowed something other than your preparation, give you confidence. A mind does seem to have the tendency to bring about the things it believes in; therefore, you need to realize that you are causing your own poor performances by a faulty way of thinking.

Getting Nervous vs Choking End-of-game nervousness doesn’t seem to cause more bad plays than occur any other time in the game, it simply gets more attention. In other words, don’t beat yourself up or consider yourself a choker just because you happen to lose a lead sometime.

Don’t Hide on the Basketball Court 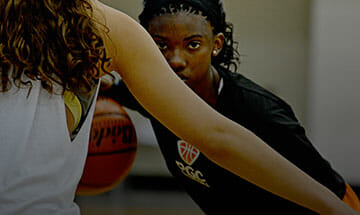 For all the complaining that players are apt to do about not getting the ball enough, one of the biggest faults of most players is their failure to come to the ball against pressure. “Hiding” is more relaxing, and that is what players tend to do. They get 25-40 feet from the ball, and they stand there waiting for it to be thrown. Sometimes, they even wave their arms and frown, but whether they know it or not, they are hiding. In 2002 I chose to transfer from my first college to the University of Alberta, a team I thought could win the National Championship. The U of A had won it all the previous year, and I wanted to win badly. I knew they were returning all five starters, but I believed in my skills and my work ethic. I knew I could break into the starting line up. When you are guarding a stronger player, especially when he has the ball, how do you combat his pivots and his movement to the basket? How do you stay close to him and apply pressure without getting an apparently accidental elbow in your eye? It can be very difficult to apply pressure and hold your ground unless you can protect yourself in the process. Protecting yourself is the key ingredient, because no player is permitted to make contact intentionally. Intentional contact will result in a foul and a turnover, so a strong player who uses his strength merely to run over you or push you is of no particular concern. He is a poor player and will soon be out of the game. The problem is with the good player with strength, more strength than you. Coaches always urge, “Hands up!” so their players will distract the offense and deflect passes, and players prefer to play with their hands at their sides. Because it is easier to move with hands at your side. (Sprinters don’t raise their hands until they cross the finish line.) In guarding the ball, there are times to play with hands down and times to play with a hand up. If you are guarding a dribbler, your hands need not be up, they should be down faking at the ball or helping your body stay in good position, on balance.

Get to the Elbow for Offensive Boards No one is quite sure about how a player is supposed to act after a loss. It doesn’t seem necessary to cry for a week, especially since you are likely to have another game within that time. Yet, it doesn’t seem quite right to walk off the court laughing either. Naturally, some losses will be more bothersome than others, and, just as naturally, every player will lose sometimes. Therefore, it seems intelligent to prepare a response in advance for those unhappy times when the inevitable happens, you lose. A click is when the ball comes into your hands and goes out again in an eighth of a second. Not a second later, after you look around. Not a moment later, after you first check to see if you can get a shot. But immediately. You catch the ball, you throw the ball–like a second baseman on a double play. The only way you can make a click pass is to know before you get the ball what you are going to do with it. That takes good court awareness.